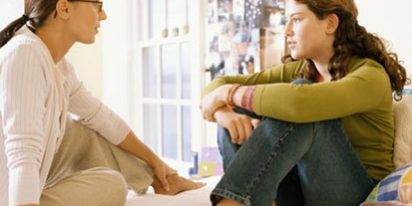 The driving question: Where and how do I fit in with my peers?

At this stage, emerging and young teens do not want to be seen as little kids anymore.

They want to be treated like teens and to do things that distinguish them from being young kids.

This can range from wanting to be free to do homework on their own without parental involvement, to putting away the dollhouse and opening up the liquor cabinet. “When we were kids we had sleepovers and played Magic cards. Now we drink and chase girls.”

Most of my conversations with younger teens center around trying to make sense of their social lives, grappling with shifting friend groups, feeling pressure to do the things teens do and wanting their parents to back off and give them more space.

Parents of teens this age are often concerned about their young teen beginning to drink and smoke weed, become sexually active, succumb to peer pressure, lose motivation for school, and episodes of disrespect towards them (and other adults) that start becoming more common.

Other parents are often concerned because their teen is NOT being included in the social life of their peers. When they used to have invitations and sleepovers from peers, they suddenly find themselves left out or alone on weekends. This can be very disconcerting for the teen and parents.

In my practice I work with teens who are on both sids of the spectrum – those who are moving quickly and consumed with social influences, and those who are struggling because they feel left out and who are often losing self-confidence because of it.

The driving question:  Who am I?

An awakening happens at this stage, and it is a point of transformation. This is the stepping off point into adulthood.

It is in this stage when teens realize for the first time in a comprehensive and profound way, that they are their own person and that they really, up until now, have little idea who they really are:

They have been who they thought they should be.

They have been who they needed to be in order to gain admittance and acceptance into the groups they wanted to become a part of (social, academic, etc).

But who are they really? How are they to answer this question?

Left unaddressed, these questions lead to anywhere from insecurity and worry, to paralyzing angst.

Resolved, they quickly launch teens into young adult life. It allows them to make excellent decisions about what to be doing, where to be doing it and who to be doing it with. Careers launch. Relationships launch. A thriving life is born.

FYI: Time and time again, I find that when I meet the “failure to launch” young adults [those in their early/mid 20s who are out of sync with their peers, either living at home or struggling to get their lives started, 9 out of 10 times, they are actually still stuck in this stage. They are lost. They need answers to this question, typically in the form of “What direction should I go with my life?”

The HeroPath For Teens Program is designed to directly address the question of Life Direction:

We lead older teens and young adults through a focused process of highly relevant self-discovery: We help them to identify their strengths, talents and natural proclivities and align them with their interests and fascinations. Our method helps them to identify themes of interest that are not always immediately obvious to them. We are able to extrapolate this using  sophisticated methodology  that is time tested and remarkably effective.

This is also the stage where most of my private clients begin having much more private, client-driven relationship with me.

Whereas the younger ones rely on their parents to schedule appointments, at this age they begin reaching out on their own, scheduling on their own and being far more forthright and transparent about what is going on in their lives and in their minds. My ability to continue to offer them intelligent, timely and valuable input determines the extent to which they include me in their lives.

On the quest to discovering who they are, they also have to recognize whose opinions should matter to them and whose should not. For more on this, read The 7 Critical Decisions Teens Must Make  It is VERY much about teens at this stage of development.

Stage 3: Begins sometime  in the late teens to early/mid 20s

The driving question(s): How am I going to do this? Am I capable of doing this?

At this stage in growing-up, the focus is on starting a career, moving out on their own and being responsible for themselves entirely. The desire is to be able to make all their own decisions and to carve out their own place and position in the world.

Most of the questions I get asked pertain to the stress of job search and interviewing, how to deal with challenges in the workplace,  dealing with roommates, expenses of adult life, and drama associated with their social lives still often being an extension of high school/college partying life.

I even designed a whole program just to address the common issues that emerge at this stage of life. I call it Beyond The Game.

“I’m done with the stupid club scene, hooking-up and continuing to party like we did in college. I’m tired of dealing with politics at work, worrying about job security… I want grown up relationships now and other things have become important to me.”

At this stage they have had enough professional experience to see first hand the personal (or should I say personnel) side of being in the workforce:

They see how favorites get played, have dealt with having to work with people with character flaws, have seen layoffs or been passed over for promotions. The thrill of getting a real paycheck is being replaced by the reality of how much is left after taxes, insurance, rent and student loans.

They have also found themselves no longer satisfied with just getting dressed up and going out to clubs and bars.

The thrill of the ‘hook-up’ is being rapidly replaced by the desire to deeply connect.

When they were younger it was about chase and pursuit. Now it becomes about finding someone to commit to who will bare witness to their lives.

Friends are great, but real, deep lasting love and intimacy is what will fulfill them.

The Driving Questions:  What really matters in life and who do I really want to go on this journey with?