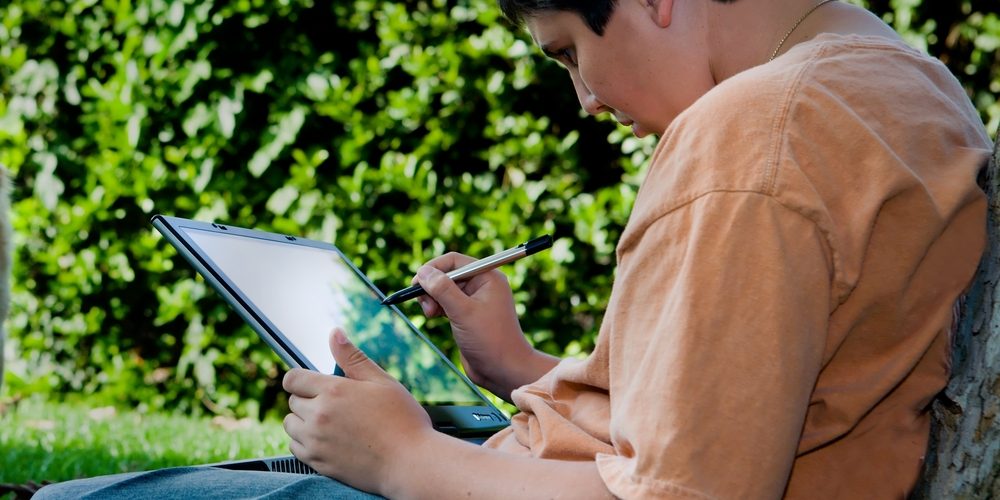 The conditioning to only be able to focus and pay attention to something or someone who is exciting and stimulating, begins young these days. Fortunately there is a pathway out  – > I explain this at the end of this entree!

I took my 7 year old to the local children’s hair salon last week. As she sat down, they gave her a sleek looking iPad, with a shiny pink cover. As we don’t have one at home, I was curious what she would do with it.

The hair stylist showed her how to open a few games on the iPad, and she was off to the races.

I sat there for 15 minutes and watched as a row of children (some as young as 3) sat tapping away at the iPads provided by the salon. A room of kids getting their hair cut was so quiet that the only sound other than the scissors snipping was the fingers tapping on the screen.

It’s actually a clever idea on their part. Something that might make some young children uncomfortable or others want to squirm around, suddenly becomes easy to do. The kids are so wrapped up in the machines that they sit quiet and still.

When it was time to finish, the stylist reached down to take the iPad and my daughter got frustrated, “No, One more time!” she cried out. She went from calm and focused to flustered the moment her candy was taken from her.

Earlier that day, my daughter and I had a very different experience, one that proves just how much children do not need iPads and constant entertainment.

It happened when we went through the local carwash together: As we entered into the wash, her imagination took over our car.

“Watch out Daddy, we are mermaids and those things out there are big sharks trying to get our treasures!” At one point she had me duck down beneath the steering wheel as we went through the foam wax section of the carwash…  a section that to her was a magic foam that would make us get stuck if it touched us.

I can pretty much assure you that our trip through that carwash was the most imaginative and adventurous one that’s happened there in a long time!

If I’d have given her the iPad they gave her at the salon, instead she would have been staring at the screen, playing some video game. She probably would have complained about how noisy the wash was and how it made it so she couldn’t hear the game. She’d have won the iPad game, but the sharks would have gotten our treasures.

The Sharks Get Our Treasures Too Often! They steal the treasure of our inherent capacity to focus, to have an imagination, to be creative, to be able to turn any experience – even the most dull – into an opportunity for adventure.

Too often, sharks disguised as iPads play a significant role in making our children dull, distractible and passive.

By the time these kids are teens, they struggle to stay focused on anything that isn’t stimulating, entertaining or interesting. It is not supposed to be this way!

I have designed whole levels of training around helping teens to tap into their inherent ability to develop Indistractible Focus™. This summer, I am leading 20 teens though a 3 week experience that will give them this skill, build their capacity and give them the Edge that belongs to anyone who can sustain Focus in spite of distraction, temptation and fatigue.