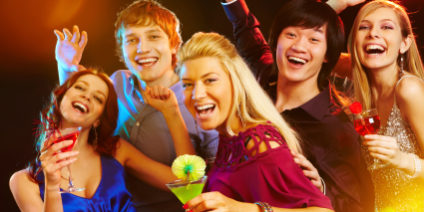 This is a story about how an insult I gave a Sorority girl and challenge I offered over a sushi lunch a month ago, led to launching her into her adult life. It should speak to any parent who has a teen who is loaded with potential but is getting caught up in wasting time – often years – on things that are off course.

Laurel is 19. She is very pretty, very sociable and has been popular since Middle School. She has been a client of mine since her Freshman year of High School… the kind of client I love working with because she always has questions, reaches out when she needs immediate advice and takes action.

She is now a Freshman at a very prominent University on the west coast of the United States.

It is one of those schools everyone knows.

Their sports programs are consistently top tier, their endowment is through the roof and so is their tuition. While there are always those students who are there because of scholarship opportunities or niche programs inside the University, it is overwhelmingly filled with kids from white, affluent families.

Like many big Universities, the Fraternity and Sorority scene on campus has a life of it’s own. Unless you are truly an insider, you wouldn’t know the extent of  the partying and drugs use that goes, on, the pervasiveness of the ‘hooking up’ culture, or the politics of popularity and social status associated with each Fraternity and Sorority.

Laurel does. She knows it all too well.

She “rushed” and joined a Sorority her first semester. She is in one of the “top two” Sororities on campus, known  for having the prettiest, most popular girls and for being associated with the most popular guys and their Fraternities.

She figured that this is where she belonged. It has the status she always had through High School.  It offered the college life experience she’d seen in movies and imagined would be for her.

By mid-Autumn, she wasn’t happy. Everywhere she turned she saw girls with expensive designer handbags and shoes… girls who were consumed with climbing the social ladder. She found herself being fake with them, smiling at people she actually didn’t like and giving attention to guys she felt were “stupid”.

By Thanksgiving, she was doubting her decision to go to this school. She began looking at places to transfer.

Over winter break, she and I met up for lunch at a local sushi restaurant.

It was during that meal that I insulted her.

But for the insult to make sense, you also need to know this: Laurel didn’t get into this prominent University because she  came from a family with money. She got in because she was an academic high achiever. She also excelled at her school’s Debate Team, earning significant roles as an underclassmen and by her Senior year being honored as one of the three top student Debate members in the state.

She also has an emerging social conscience that runs far deeper in her than her social self-consciousness. She easily loses sight of this, but is quickly re-engaged in her every time I point her attention towards it.

Winning at the sorority social climbing game may appeal to her competitive side,  but it also required her to “dumb” herself down. She felt stuck. She didn’t want to lose but she also didn’t like who she had to be, to win.

This is where our conversation over lunch last month, took off:

Me: “Has it occurred to you that maybe you are not at the wrong school, you are just consumed with winning at the wrong game?”

Me: “You are getting caught up at winning the social climbing game with a bunch of ditzy Sorority girls… kind of like you want to be Queen of the Ditzes… it may not say much about your worth to the world, but at least as you walk around campus and you have bragging rights that you excel at dumbing yourself down to whatever level it takes to be at the top of that scene. It’s too bad you are not blond. It would just be too cliche’…”

Her: “That’s harsh… and I don’t think you understand..”

Me (interrupting): “No, I don’t think you understand!” I interjected forcefully.  “You are not just smart, you are competitive – REALLY COMPETITIVE.  And you have a part of you that cares deeply about the world and the way you use your talents to impact it… Don’t just ignore that and put it off until you graduate. If you are going to compete and win at something, why not make it something that when you win at it, will actually matter to you and make you feel good?”

Me: “You loved Debate when you were in High School. You rocked when you were in intense Debates… You are thinking about going to Law School… Why don’t you get yourself a job or internship doing something on behalf of the legal rights of disenfranchised people or a political cause that you care about? Why not start being too busy for the social climbing BS and start spending time learning something and helping people who could use your help?”

Her: “Like what? They only give law Internships to Upper Classmen and Graduate Students?”

Me: “And you are going to let something as stupid as a stupid policy stop you??? C’mon, where is the competitive side of you??? When they say ‘Sorry you aren’t old enough, convince them that they need you and this has nothing to do with age! Be the first Freshman in the history of the University to do a Graduate level internship… start there!”

Me: “I’d start with organizations that advocate for people you are concerned about.. things like immigration policies or battered women or children in the foster care system or religious persecution… You tell me! It takes 60 seconds to google it and see what organizations are out there…. Imagine what it would be like to spend your Thursday sitting in court next to a high profile attorney, helping her defend someone who is being taken advantage of by a corrupt system… contrast that with spending the same Thursday worrying about which Gucci bag or pair of Jimmy Chous you should wear to be popular that day?”

Her: “Very good one Jeffrey… surprised you know about Jimmy Choo’s!”

Me; “Damn right! I am too busy doing things I care about to go shopping for shoes!”

After lunch we parted ways and agreed to talk again in a few weeks – as we have for years. I quickly googled a few options locally in the city where her school is, and sent her links to some organizations that would be right up her ally. The rest was up to her.

Two weeks to the day after her return to school, I got this text: When we spoke later that day, she filled me in on what it took to get an internship with the District Attorney’s office:

As expected, when she initially inquired she learned that they only offer internships to Law Students. By the time she was done working her magic, she had not only secured an interview with them, but with one of the leaders of the department. She was offered an internship on the spot. Not only was she the first Freshman from her school to secure such an internship, she was also the first for the DA’s office.

Since that day, she is “herself” again.

The Sorority life is just one part of her life now, rather than an all consuming identity as it becomes for many. She appreciates that it offers lots of socializing for when she wants a break from the work and demands of school. She is also finding herself connecting with some different girls in it now who feel much more “real” to her.

It is interesting how returning to the right path in life not only makes her excited about life agin, but also makes her both attracted to and attractive to, a different type of person.

Being on the right path makes her the kind of person who secures an impossible to land internship, it make her the kind of person who people who are deeper, smarter and ambitious are drawn to and makes her literally see the world differently: To see opportunities that were there all along, and evident to anyone who is living life on the right path.

Too many youth don’t follow the right path for their life and the consequences of this are painful to watch. Some lack the institutional know-how that a girl like Laurel is quickly learning to master, thus they let institutional BS stop them…

Others – most in my experience – have not been led through the process of self-discovery that leads to recognizing the right path to follow, a path that allows them to naturally be the person they really want to be and quickly discover what fulfilling  and valuable experiences await them when they do.

I’ve made a life out of helping teens and young adults to realize who they are, find their path and have the courage and skill to walk it.  Often a few hours of this input can save them years off course… years that are better spent making the world a better place like Laurel will now be doing – and none too soon.

Contact me if you think your son or daughter would benefit from very direct help in finding Life Direction. I’m happy to discuss this further with you directly.

Also, Check Out This Unique Opportunity To Equip Your Teens To Master Life’s Challenges & Achieve True Personal Success: A weekend program that enables teens and young adults to find Life Direction, and know what the next steps are to begin taking to launch them onto a deeply fulfilling journey in life: