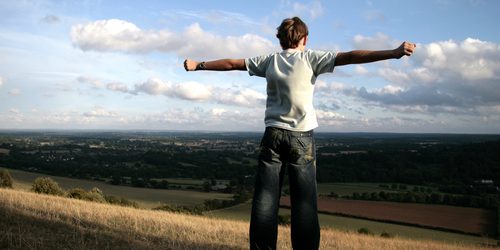 Help Save Our Kids From The “Find Your Passion” Dilemma

For over a decade now, Passion is in Fashion. Similar to the “Happiness” movement that swept the self-help industry, it has become ubiquitous to talk about passion as something that is everyone’s birthright and simply must be found. (If you don’t know, in the year 2000 there were only  40 books published on happiness. By 2005 there were over 4000 new books on happiness being published annually.  The pursuit of happiness is big business. As is the game of finding your passion.

As one who works intimately with youth in the vulnerable stage of their adolescence where they are emerging into young adulthood, I have seen the damage of the “find your passion” obsession that has been imposed upon them (and almost always with the best of intentions).

Here’s why I think this is bad for kids:

What they fail to recognize is that passion actually stems from the ancient Greek verb “pashko” which means to suffer or endure. The word transcended Greek culture when it was adopted by the early Christians who spoke of the Passion of Christ. Why is this relevant? Because what passion really means is “something you love enough that you will suffer for it.”

Now if you speak with anyone who has truly found a passion for themselves, they will absolutely tell you that they suffer for it, and often immensely.

That is not how most young people are hearing this though, to the extent that they are even capable of hearing it even if it was be explained in that way.

#2: Most young people hear “find your passion” as “I need to find the thing I love doing that I want to do with my life and feel I was meant to do.”

Then when they turn out to be like most people who never find “The Thing” that they love so much they know they were meant to do it, they feel stressed, lost and even paralyzed with fear that they may make the wrong career choice. Rather than just go in a direction and let their journey unfold, they get paralyzed with fear and doubt.

This idea has become so ingrained in young people’s heads that it is causing them stress, keeping them up at night and sending them way off track.

Let me propose an alternative, with a little help from Hollywood:

In the film Serendipity, John Cusack plays a man who spends 10 years looking for a woman he felt he was fated to meet again. The night before his wedding he finds himself still thinking of her and even though all efforts to find her have failed, he realizes that if he still feels this way about a woman he met years earlier, the he must not marry someone else. When he calls off the wedding his best friend accompanies him on a walk through Central Park. Cusack asks his friend if he thinks he’s crazy. His friend replies:

You know the ancient Greeks didn’t write obituaries. They only asked one question after a man died: “Did he live with passion?”

I don’t know whether it is true that the ancient Greeks did that, but I’d like to believe it is.

So, Rather than pressure kids to “find their passion”, teach them instead to identify and commit their lives to the Direction that is best matched for them, then to live an inspired life that is “Lived with passion” for a lifetime in this direction. (Helping people find the right direction for themselves is a huge part of my work – and it often takes me about 20 minutes to do with them. Mentoring them to sustain approaching life with intensity and passion often takes much longer.)

While everyone may not find something to do with their life that they feel passionate about, regardless, they can live with passion.

To live their lives, fully having gone on the journey that is uniquely theirs, open to the many surprises, wonders and yes, at times even to take in the little bit of magic that seems to endlessly find its way into the lives of those who live this way of life.